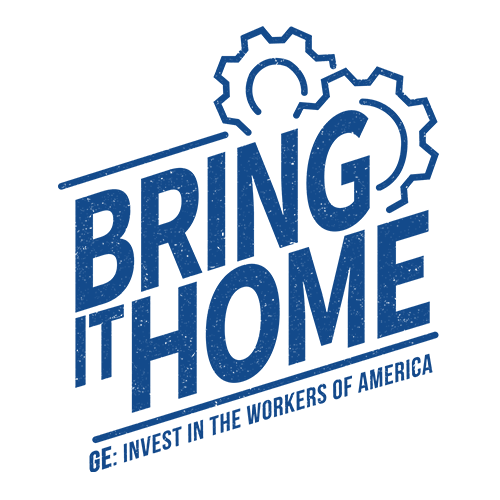 FOR IMMEDIATE RELEASE CONTACT ON BEHALF OF IUE-CWA LOCAL 201: buildbackbetterge@gmail.com

LOCAL UNION IN LYNN, MA WANTS TO KNOW HOW MANY DEPENDENTS HAVE LOST MEDICAL COVERAGE, WANTS EVERYONE RESTORED. LYNN, MA – Today, IUE-CWA Local 201, the union for General Electric (GE) workers at the company’s “River Works” plant in Lynn, announced that workers at the Massachusetts facility are discovering that GE has been cutting their dependents off of health care coverage. Affected GE workers at the Lynn facility report being blindsided by the termination of health care coverage for their loved ones, saying there was no conversation or phone call from any of their supervisors. In addition to the Massachusetts plant, GE is dropping employees’ family members from coverage across a number of facilities nationwide.
This is happening just weeks after internal communications sent to employees by General Electric executives revealed new offshoring and outsourcing plans to cut 80 jobs at the Lynn, MA facility, even as GE prepares to ingest more than $315 million in new taxpayer funds provided through the National Defense Authorization Act.
“Imagine showing up at your doctor’s office only to find out that your kid’s health insurance has been cut off,” said Adam Kaszynski, a factory worker at the Lynn, MA GE plant who also represents the plant’s workforce as Local President of IUE-CWA Local 201. “So far, we’ve heard about this happening to six workers’ families here at the Lynn plant, and I wonder how many more GE workers here and across the country – unionized or not – are about to discover that their loved ones have lost medical and dental coverage.”
“GE has a responsibility to protect health care access for its employees and their families who have worked for decades to make this plant successful and keep the Lynn community strong,” Kaszynski added. “GE is failing to honor its commitment to these workers. GE seems to be distracted with the $2 billion they are spending in an attempt to split into three companies.”
“Our family has counted on GE health coverage for years and it’s shocking the company is suddenly cutting off our insurance now. I went to see the doctor for X-rays and tests and only found out days later that all of a sudden those medical expenses wouldn’t be covered. GE taking health care away from workers’ families, just after announcing they are cutting jobs at the plant, is adding insult to injury,” said Corinna Cole, the wife of a GE worker of 5 years at the Lynn, MA plant, and mother of an 8-year-old daughter. “Ripping away health coverage from our family in the middle of a pandemic should be unthinkable. We submitted our marriage certificate to prove my eligibility, but that wasn’t good enough for the company. We’re asking GE to do the right thing and fix this by restoring our health care and the health care of all the other workers’ families who have been impacted.”
BACKGROUND:

GE health care cuts come just weeks after news the company is cutting 80 military aviation manufacturing jobs at the Lynn, MA plant. GE plans to move much of the work from the company’s largest unionized domestic facility to South Korea, Canada, India, France, and China and non-union domestic facilities. Workers have been raising the alarm on GE’s failure to invest in the workforce of America, despite the U.S. government being one of its largest clients.

The “GE: Bring it Home” campaign began late last year, backed by a coalition that ranged from leading U.S. veterans groups to major environmental advocacy organizations. The campaign has been meeting with elected officials and GE workers in multiple states and in Washington, D.C. to raise awareness of the negative impact of outsourcing threats like those recently raised in Lynn, MA.

The campaign has also offered an affirmational message, saying GE has a chance to regain its footing and to become an industry leader in key spaces like defense and green energy by bringing work back to the United States, rather than further stretching its supply chains and footprint through multi-billion dollar offshore and overseas investments.

Workers at multiple GE factories have engaged in national days of action as part of the campaign and employees at the Lynn GE plant have vowed that they will be fighting back against the latest outsourcing and offshoring threats specific to their plant.

Workers said details of protests centered on the threatened outsourcing and offshoring of jobs will be forthcoming along with other potential actions to continue calling on GE to begin refocusing its immense taxpayer and defense revenues into creating family-sustaining union jobs in the United States.

Workers have also vowed to ramp up their outreach to elected officials at both the state and federal levels to address the question of how to begin ensuring that domestic government resources allocated to GE are used to protect, advance, and increase domestic job growth – rather than the opposite.

GE’s facility in Lynn has seen a 90% reduction in its workforce since 1985 when it employed over 13,000 unionized hourly workers. Offshoring, outsourcing, and transfers of work just like this have left Lynn workers behind as GE continues to expand and invest in their facilities overseas.

Since 2010, GE has invested over $1 billion dollars in its overseas facilities, including a $200 million investment in its Pune India brilliant factory, one of the sites where Lynn’s work is slated to move to. This trend of systematic disinvestment was well-documented in a recent report from UMass Boston Labor Resource Center and the Cornell University School of Industrial and Labor Relations which stated, “Over the past 50 years, a steady stream of value-added work, along with the associated work hours, has been moved to plants all over the world, systemically damaging Lynn’s profitability and long-term viability.”